I met Karis through a Facebook group of Christian artist’s/writers/all creative-type souls.

I don’t get on Facebook all that often, and on this particular group’s page, even less.

But as I was scrolling through the newsfeed I stopped at “The Worship Studio’s” latest submission at that time—Karis’s.

There was something about her paintings that drew me in. I couldn’t stop studying them. I clicked on the link to her website and I became even more captivated by her work.

I was particularly intrigued by the unusual flower she had painted. Was it a whimsical flower of her imagination? I had certainly never seen a real flower that looked like that!

She had given it the title “Edelweiss.”  Edelweiss?  Really?  But, why?

Because, yeah, I knew that name—-the song from the movie “The Sound of Music!” Everyone knows that song, right? And I even knew all the lyrics! (As well as to EVERY song from that movie due to the fact that I played the RECORD over and over and over when I was a little girl. And then I went running through the acres of avocado groves where I grew up in South Florida as I envisioned myself as Maria singing on the Swiss Alps! Pretty good imagination for a little girl running around in the hot, muggy, flatlands of Florida! But I digress.)

Anyway, I knew, or THOUGHT I knew, that the song was the Austrian national anthem. Ummm…wrong. It was, and is, about the flower, the Edelweiss:

Okay, so it does mention “my homeland”—which apparently led me astray for quite a number of years.  And that just proves we humans are “dumb sheep” who really are “prone to wander!”— sometimes for YEARS due to false assumptions and lack of knowledge!!

{  In this case, the wandering was harmless.  }

As I was brought back to the lyrics these many years later, I now see they are obviously more about the flower than “the homeland”!  You would think that I would’ve researched this before but, uh…no, I never did. Until Karis’s painting!

The reason Captain von Trapp was singing about the flower is because it is a cherished symbol in Austria and Switzerland—even worn as a cap emblem by certain Austrian Army and the German Gebirgsjäger (mountain troopers) units stationed in the nearby Bavarian Alps. It has also long been prominent in folklore and popular sentiment. Edelweiss means “noble-white” in German. (Source: Wikipedia)

Ahhh, Karis. The roads you led me down—both memory lane and a new trail!— with your beautiful painting.

Not only did I study Karis’s “Edelweiss” and her other paintings, I also read about the gifted artist and, boy, was I surprised to read her story.

So…I bought the painting. Haha. Had to have it. For its beauty, her beauty, her story, and the inspiration I received from ALL of that when I look at the painting that is propped on my kitchen counter—where I put it when it arrived so I could stare at it awhile before I found a home for it on a wall somewhere. But, months later, it’s still propped there, giving me that shot of inspiration as I chop veggies and such. 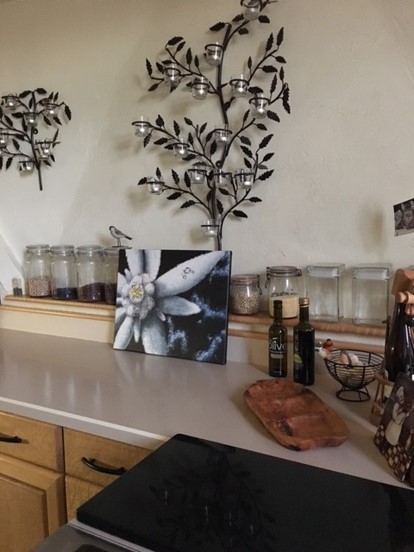 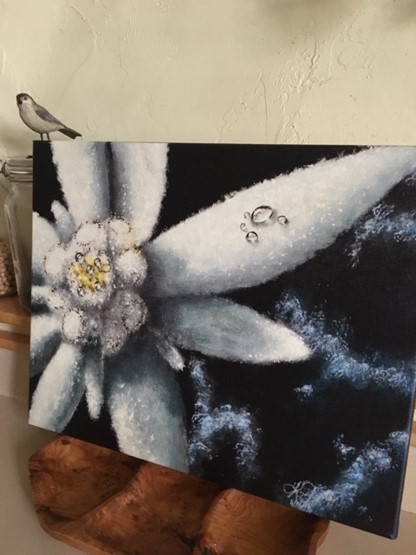 More than anything else, the painting represents THE Creator, Karis’s Creator, OUR Creator because He put the gift in Karis—my representative “early bloomer.”  I have had a number of email chats with this special young woman and, let me tell you, she has a pure heart of love for Jesus…and it shows in her writing, her art, and where she is investing her time and money. I hope you visit BOTH of her websites!

And now I would like for her to tell her story, in her own words, so that you, too, can be inspired…

About the Artist
by Karis Feezell 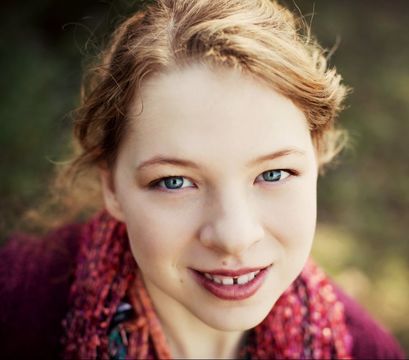 I am a determined, strong, compassionate nineteen year old who has struggled with physical issues all my life. I have Cerebral Palsy, Beckwith-Weidemann Syndrome, and birth defects in my hands and feet. When I was born, the cord was wrapped around my neck, resulting in lack of oxygen for eight minutes until I was revived. During this incident, my cerebellum was injured, causing constant shaky tremors. Because of this, it is a struggle to control my hands, particularly when it comes to opening them. The fact that I have these issues and can still draw and paint is proof to me that God is still working miracles to this day. The tremors also effect my diaphragm, making it difficult for me to sing. However I have decided to not let these issues control my life, and now my biggest passions are singing with my choir and painting. Even though my feet turn in as a result of the CP, it does not really effect my ability to walk… it is just different. In spite of the many complications that usually accompany CP and Beckwith-Weidemann Syndrome, I process information, think, and talk normally. While that and several other symptoms of the syndrome never manifested in me, I do still have the BWS marks, a strawberry-colored patch of skin at the top and base of my spine, and dimples behind my ears. They are a daily reminder that God does fight my battles, and that nothing is out of His control.

I used to think of my mind as a bird inside an inescapable cage, my defective body. I wanted to do and achieve so much, but could not because of my physical issues, thinking it would have been easier if I had been mentally retarded, thus never knowing the difference. As I have grown, my focus has shifted to the things I can do, and the things I have achieved. In pushing through difficult tasks, I have found the strength to turn my disabilities into abilities. The gift of art has shown me that beauty really can come from ashes. Art is just another way to show God’s amazing power.  It is also the time I feel closest to Him. When I paint, I am visibly seeing God’s strength work through my weakness.  It does not get better than that! I only want to give God honor through my gift.

Did you know that there are more people enslaved today than at any other time in history? Sadly, most people think that slavery ended in 1865; however, it did not. There are 20.9 million people enslaved today around the world. Modern-day slavery, also known as human trafficking, is the largest criminal industry in the world and most people do not know it even exists.

In 10th grade I had a Mock Art Grant Project as a homework assignment. I was required to come up with an art project and present it in front of the class and a “judge” to win a grant. I decided I did not want this to just be a school project, but something to help wake people up to the horror happening around them, and show them ways they can help make a difference against human trafficking. Being an artist, I wanted to use my art to assist in doing that, so Art 2 Free Hearts was born. Researching into the living hell of modern-day slavery impassioned me. Human trafficking is not just an “overseas” issue; it is an American issue. People are being trafficked here in Tennessee! My Art 2 Free Hearts site provides you with information about human trafficking, and ways you can help prevent it.

Ashes 2 Beauty Artistry is my online art gallery, where you can view and purchase prints of my art. Ashes 2 Beauty and Art 2 Free Hearts work in conjunction with each other. Ten percent of the gallery sales, along with portions of the profits from Art 2 Free Hearts fundraisers and art shows, are donated to an organization that fights against human trafficking. Right now, Art 2 Free Hearts is helping to support Blazing Hope Ranch, an organization that provides housing, healing, counseling, protection and education to human trafficking survivors. My prayer is that once my business starts to grow, a larger percentage of the sales will be able to go towards organizations like Blazing Hope Ranch.

Below is some of Karis’s work—in case you don’t make it over to her site(s), but I hope you do.   On her site she gives some brief descriptions of her paintings and what medium she used for each. 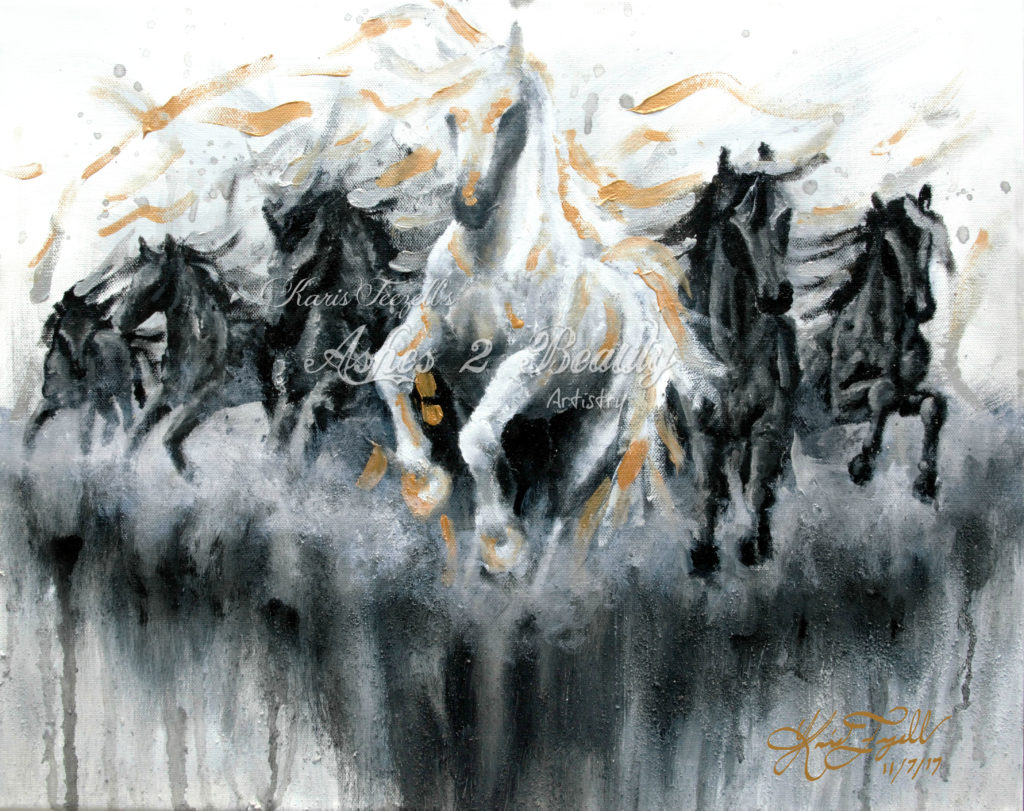 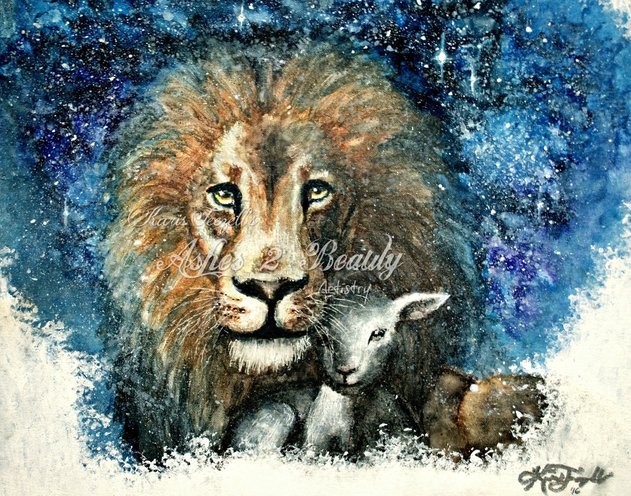 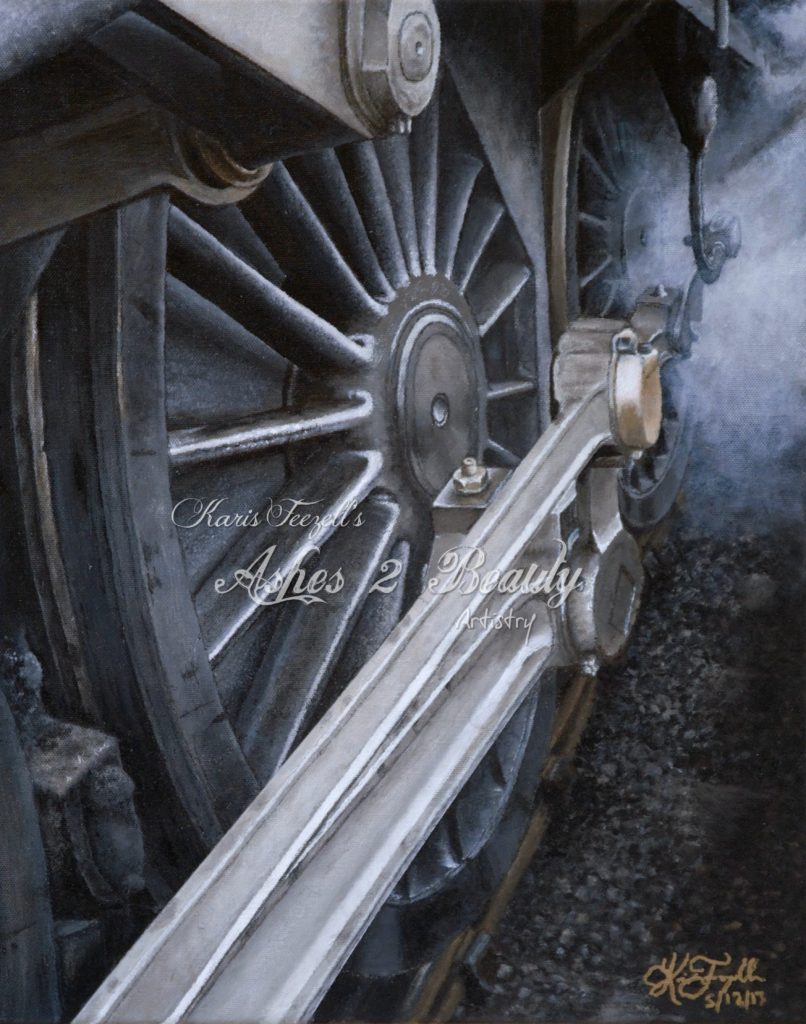 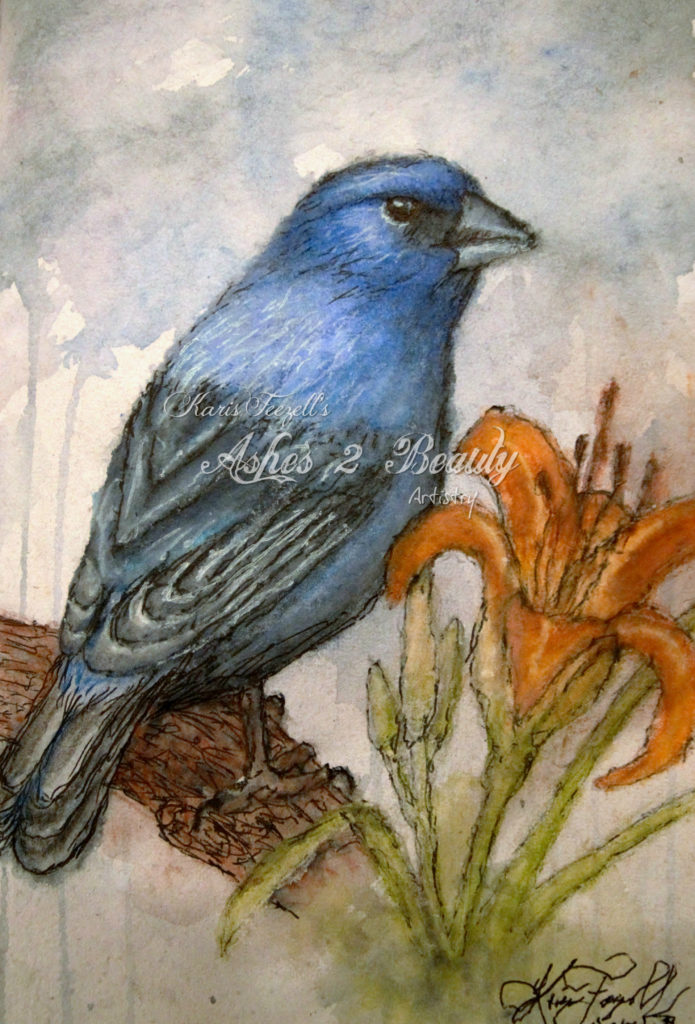 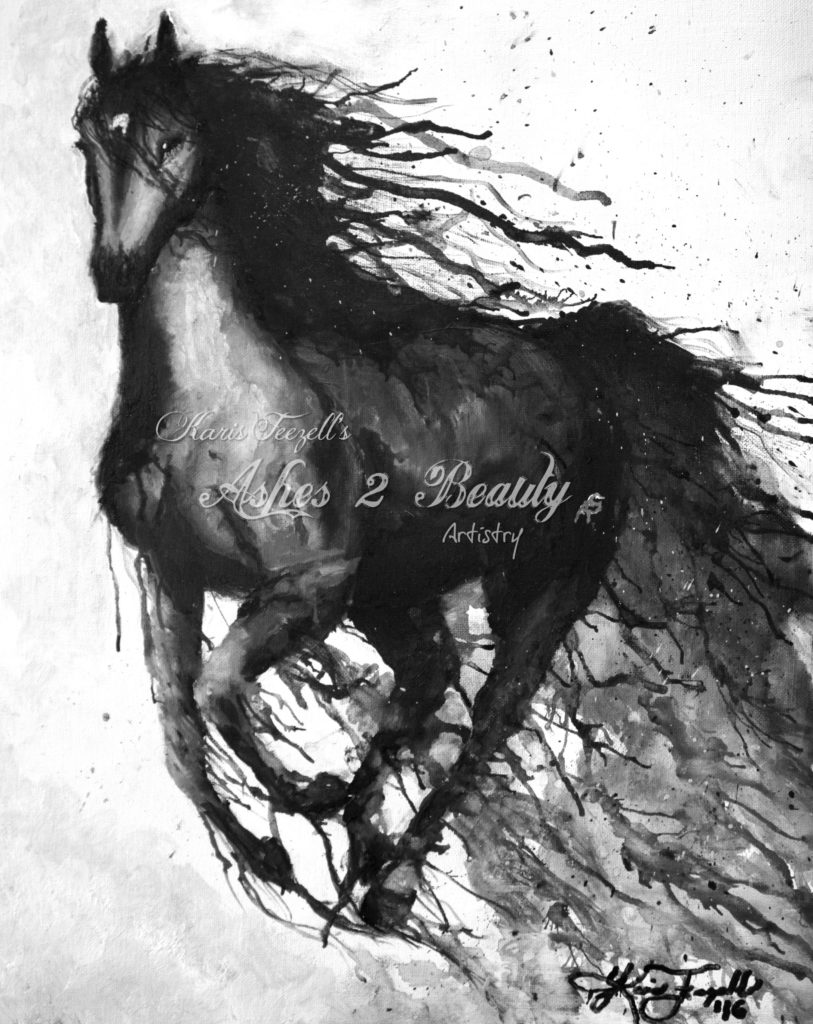 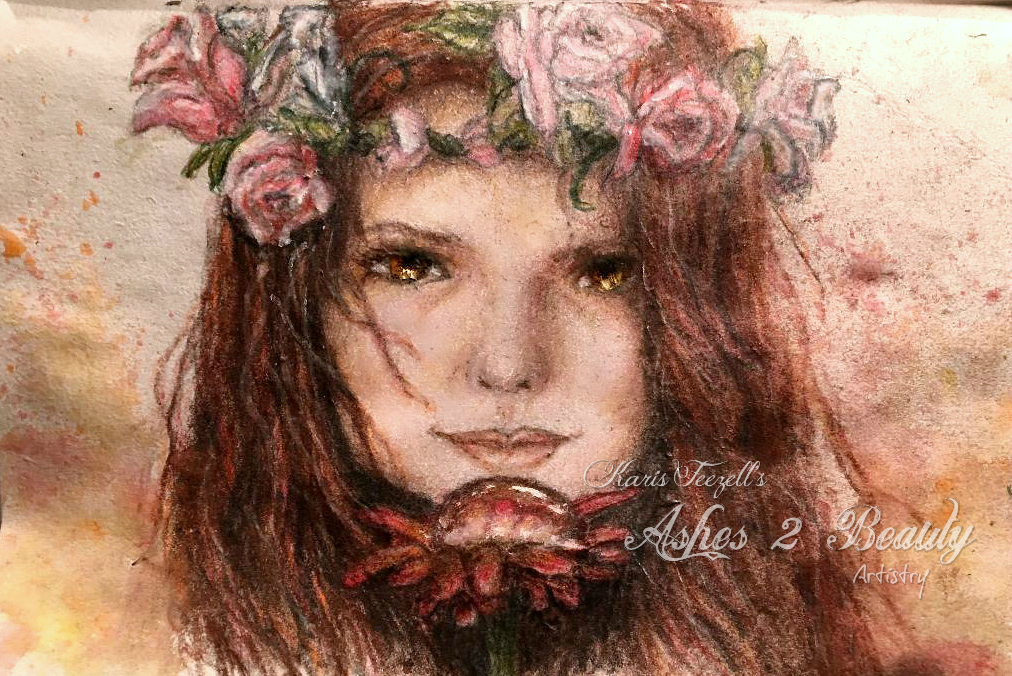 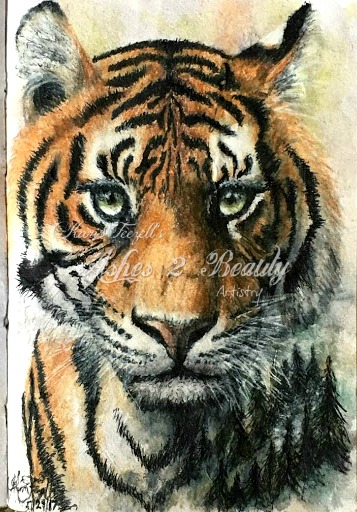 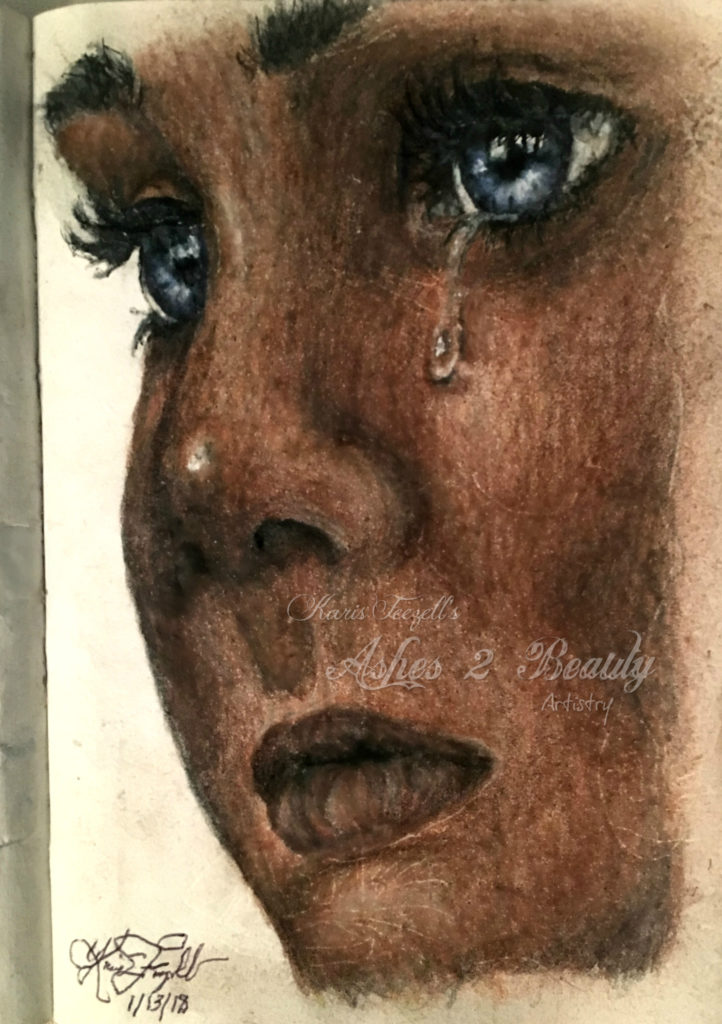 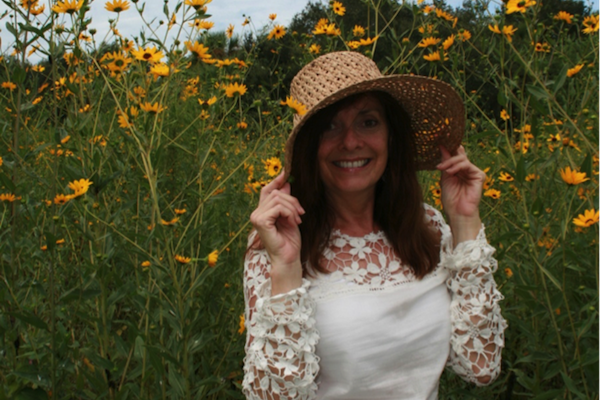